Girls getaway to the Maldive's 😍

My friend Nadine mentioned an amazing travel deal to the Maldives with Luxury Escapes. It was an all inclusive deal for food, alcohol and 5 nights of accommodation.

This is my dream holiday destination and a place I never thought I could go to at this age with young kids but I decided to mention it to Sam and he agreed I could go! This meant a kid and husband free holiday 🤣.

I booked this while I was pregnant with Dominic with a month or so to go in my pregnancy knowing full well I would deserve a holiday in just over a year 😂. We booked for the month of September.

I left when he was 14 months old which was extremely hard but I knew all the kids would be fine with dad and I had to go on this holiday!

If relaxation is what your after in a holiday than you can't go wrong with the Maldives!

Just writing this makes me want to go back. I wonder if it is possible to relocate during our Winter to live there? 🤔

The flight time for us was pretty big but it was definitely worth it. We had an 8 hour flight to Singapore with some spare hours in the airport and then another 4.5 hour flight to Velana National Airport. There was a lot of airport waiting but we managed to entertain oursleves well.

Looking out of the airplane before we landed to see all the resorts spread out in the middle of the ocean made even more excited.

We hopped on a boat transfer that took around 20 minutes to get to our resort Centara Ras Fushi Resort & Spa.

There were a few staff there on arrival to greet us and take our bags.

After having our package explained to us and shown on a map where restaurants etc were, we were taken to the lunch buffet at the Oceans Restaurant.

The buffet was amazing, it had so many options. We had breakfast here every morning as everyone else and also had many lunches and a few dinners here. The dinner was a different theme every night.

Morning tea, afternoon tea and before dinner canapes were also included in the package. We may have only had one morning tea as we were too busy swimming and snorkeling most mornings after breakfast and some other small meals were skipped as we were generally still full from lunch!

After lunch we hopped on a buggy to our over water villa and ours was the first villa which initially we were bummed about but soon realised it was great as it was less walking from there to the restaurants and also so close to the bar.🤣

The best thing about having an over the water villa is being able to swim and snorkel off it!

I feel like I am pro at snorkeling with the amount we did.

Waking up in the morning and opening your curtains to see the ocean at your door step was an unreal experience!

Swimming and snorkeling was our main activity but we did go for a little kayak and tried paddle boating (first time) and it was SO fun!

The weather was beautifully warm the whole time but we did get some rain and it was a little windy most of the time so I couldn't try stand up paddle boarding 😢. We do live right near a beach so I am sure in Summer I can do this anyway but I just thought it would be extra nice to have my first go in the Maldives.

The rain during the day would last 10-20 minutes and it didn't happen too often so this didn't bother us. The only way the rain was 'inconvenient' was when we lost a great sunbathing lounge spot at the beach because we left when the rain was heavy and came back to claim it 15 minutes later but it had been taken (first world problems) and another day we had to wear raincoats to walk to lunch which the resort supplied in our room. They have everything you need in those villas.

So really the short bursts of random rain weren't a bother.

Even when its cloudy, its still beautiful.

We had a look into the excursions and there were quite a few to choose from but we could not go past the Turtle Quest 🐢 so we booked that within a day of being at the resort. The excursions were an extra fee but were reasonably priced for what they were.

The Turtle Quest involved a boat ride and then a snorkel with turtles😍.

The day came and we were so excited! The boat ride started off fine as in I was fine and not sea sick....yet. After about 20 minutes I was not feeling good and Nadine was totally fine. I thought the 'quick' boat trip would of been 20 minutes max but it took probably double that which is fine for a lot of people, just not those who get sea sick.

We arrived to the area for snorkeling and my first thought was that we were going to float over to the light blue and more shallow area while everyone was getting geared up...nope we were jumping into the deep dark blue ocean! I was so sick at that point that I could barely put on the snorkel, flippers and life jacket to jump out! I was worried about jumping in but once I got myself together, I jumped in and was relieved to be out of the boat and I was not scared at all but little did I realise I was going to be bobbing around with the motion of the ocean🤢. I tried my best to snorkel as much as I could and take photos but since as though there seemed to be only one turtle deep down, I gave up and floated around and as I did I noticed another couple not feeling well either. At least it wasn't just me!

I have some videos but you can't see anything.

Even though this trip was a bit of a fail, it was not the resorts fault there weren't many turtles that day and they looked after me very well on the way back and others who were sick too.

It was still cool to see that one turtle!

There is something I really loved about the resort. It was so eco-friendly! 💚

There wasn't a plastic bottle in sight. Even on our turtle quest, they gave everyone water from a glass bottle they had previously filled and supplied paper cups.

The water provided in the villa was also from a glass bottle.

When you ordered a drink, straws were not given out unless you asked but the straws I saw they gave others were also made from paper.

More resorts/hotels need to make changes, even if they are small. Every plastic free change makes a difference!

If you stay at Centara Ras Fushi Resort & Spa, you must treat yourself at SPA Cenvaree.

The treatments are amazing and the staff are lovely. I am positive you will not regret getting yourself pampered here. It is pure relaxing bliss and it will make your holiday that extra bit nice 🌸.

Most afternoons were spent sipping drinks on an over water hammock while chatting about life 🍸😊.

Love a girly trip. Just what the doctor ordered. 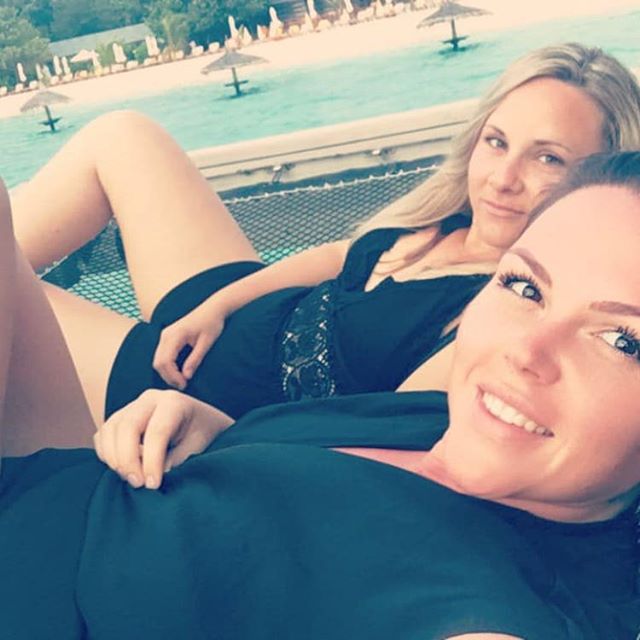 The only tips I have for this resort is to make sure you purchase an all inclusive accommodation, meal and alcohol package when booking. This may be a good idea for other resorts too if they are available.

It would get quite pricey purchasing everything separately. We purchased a couple of drinks and meals separately and that added up quickly.

See you again Maldives, your beauty will be seen and experienced by me again...and maybe I will bring the husband next time 🤣❤

A week in Bali with kids: What we did & where we stayed.